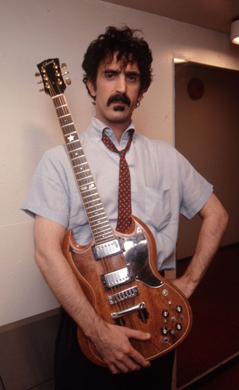 Brilliant composer, satiric and guitarist. Zappa loved rhythm & blues, with large ease he combined rock with jazz and wrote compositions that, among many, where performed by the London Symphony Orchestra.
Frank Zappa was born in 1940 in Baltimore. He was the son of an immigrant’s family. His father was born on Sicily and worked in the army. Because of this the family Zappa moved regularly. Frank Zappa grew up in California. In school he wasn’t a brilliant pupil, but he was a distinguished rebel. Finally he was expelled from school because of his experimenting with dangerous chemicals. In his school years Zappa was especially interested in doo-wop.
Meanwhile he played in amateur bands as a drummer and later on as a guitarist. With his first earned money he bought a recording studio, which became the basis of The Mothers or Invention. In 1966, the first album of The Mothers or Invention was released; Freak Out!
Through the years many changes took place in The Mothers. Since the 70´s he performed under his own name Frank Zappa and became notorious because of the large number of albums he released.
An article in a periodical brought him on the track of Edgar Varèse. Later on he became acquainted with the compositions of Igor Stravinsky and Zappa also wanted to become a famous composer.
Zappa died from cancer in 1993.